So yeah, in other news.... School has been so terribly busy.. like rediculous. This weekend we had mini drama's where we each had to shoot a scene from a movie... so we spent all week at school and then all weekend as well... and by weekend I mean eveyday from 8 to 1.... and we lost the hour on daylight savings. It was hard... really hard. We even had to act in them, that was hard too.. surprisingly hard. I love AD(Assistant Directing)ing though, Directing was good, and DoPing too.... So basically I love doing everything..... The only drawback is the time thing, and the fact that sometimes you have to work with people you don't get along with entirely.... but that's life right? 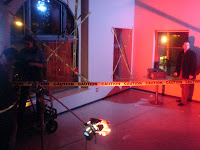 One of the Sets we put up for the Mini Dramas. 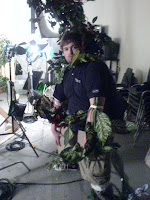 On the set of the Cine exersize I DoP'd on.. This is my friend AJ Rogers, plant man. it was cool, I also acted in it.... it was Charlie Chaplin vs. the Plant Man. 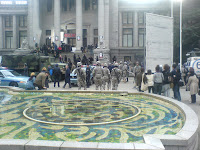 The set if the 4400 at the Vancouver Art Gallery. 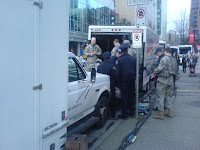 American Soldier's taking over Vancouver? No, that's stupid... They're just actor's in the series the 4400. 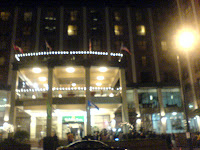 The set of the new Da Vinci's Inquest movie...

HOLY CRAP!!!! You know that Ad for A&W? The one where the kid and his wife come home and they buy the grandpa buger to tell the parents they're having a baby? yeah that one? I totally met the actor who played the guy! yeah the guy! The son, to be more specific...... I knew I'd seen that guy somewhere before.... I forget his name at the moment.... I should have paid more attention..... oh well.... I totally met him though.... Pretty good actor. I also met Tyler McClendon in our acting workshop. Also a good actor... we recreated a Scene from American Beauty... Those Actor, Director workshops are kind of cool.. I didn't do very well, it was a little awkward.... imagine that.... oh well...

I hate how all ads use the best music. I find good indie music, listen to it a while and wait for some huge corperation to use it, make it popular and then have every teenie bopper and their dog listen to it... and then I can't like it as much... Dove used a song by Nik Zubeck.. Pepe Romero did a song for a different ad. It is such an awesome song... It's my favorite song of the day..... the words are just so good matched only by the good ol' folksy tune.... The lyrics are:

In your eyes I do somersaults and cartwheels in the air
I’m a Master of disguise
You are prettier than all the girly girls in magazines
Your smile is like the sun
I’m the lucking one.

On that happy note, I leave you now....
More pictures on my facebook.. thank you....
peace out
Andrew
Posted by Andrew Sorenson at 9:06 PM

Damn it Andrew, I never saw the finale! (insert frustrated yet joking tone) Hope you don't go crazy with no sleep and working with annoying people, I know what that's like.

uhhh i thought that song was by that nick guy or whatever his name was....also i totally thought that plant guy was going to be from the stupids. sigh. such a good movie. well i hope you had a lovely chat with your parents. dont loose too much sleep over the sadness of corner gas. and dont cut any more fingers. you only have 8 left.

Yeah... I guess I found that out a little later... the dove company lied to me at first

The World of Haab said...

Hey Andrew...hope you are survivin VFS.....A&W dude...his name's Julius and acted in the a mid-term drama last year and a final project. Hes a good guy...and one of the best actors we had...e.xcept for the weird breathing exercises my wife found him doing on our bed...weiiiiiirrrd. Anyway man enjoy The Van

If you want to know more here it is
home business reviews
www.home-businessreviews.com