A Comedy of Romance

Romance is a vital part of human life, a key to the human condition. Okay, don't go making any assumptions, because as of yet, personally I have absolutly no romance in my life.... like none.. but that aside. From time to time I enjoy the odd romantic comedy as I myself am a hopless romantic ( don't tell anyone) and as we've already established, I don't have any romance of my own...... which brings us to what I'm actually going to takl about.... Today I saw the best romantic comedy ever! Was it Music and Lyrics? or maybe um.... Norbit? no and most certainly not.

It was City Lights by the infamous Charlie Chaplin. Surprised? I was too! I thought he just did shorts, slapstick and the like. I wasn't really looking foreward to just goofy old fasioned antics, but it was a great film. The story was so touching; about a poor man, the Tramp, who falls in love with a blind flower girl. He is an awkward poor man. She thinks he is a rich man and he works hard to find a way to pay for her rent and hospital bills to get her eyes fixed, much to his own deficiet... After he gets out of prision he meets her at her shop, she has her sight and doesn't realize that the tramp is her benefacter. Only when she touches his hand does she realize that this poor disheveled tramp is the one she loves.... The whole film is broken up by Chaplins slapstick antics and still applicable humour..... That is just a really short synopsis... it really has quite a bit of depth, which is what surprised me about this film. The art of filmmaking was fully developed very early on. Yup, the best romantic comedy, and it was filmed in '31. 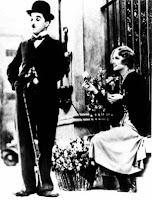 The appeal of the film was that if the Tramp could find love and do well in life than anyone could
. An awkward poor man can find love... And when these films came out, in the late 20's and early 30's, the burgeoning immigrant population really resounded with that notion... It gives all of us awkward single losers something to hope for.... sigh.....so yeah, that's the story, a great movie... which reminded me of my failings and sad state, but also gave me the hope of change someday.

Now that's what movies should do. The more classic films I see the more respect I have for them. They are way better than the stuff they are trying to pass off nowadays.. As I finish this post a gentle snow fall cover's the city, blanketing the streets and bays with white frosting. Obscuring the view... It's quite beautiful....
Posted by Andrew Sorenson at 10:47 PM

You should watch the great dictator, he wrote it before america even entered ww2 and it has an amazing speech at the end of it. He was pretty freakin gutsy for his time.

oh andrew. you're my favorite.

I'm glad you posted this... I had seen "City Lights" a few years ago at the film festival my family goes to near Camrose, but I could never remember what it was called even though I really enjoyed it. The film really surprised me, too.

clinton! i'm supposed to fight you. come to my house!