My many adventures so far, 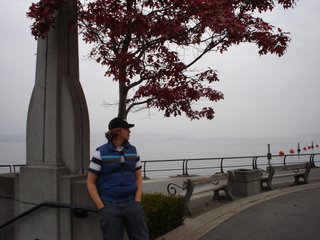 
Hey all, I finally got the internet and I'm pretty much settled in here in Vancouver. I've got so much to talk about since my last entry.

I drove out on Wedensday with my mom, via Calgary where we visited Darcy, which was short but it was good to see him. We drove to.... Revelstoke.. I think, and there we were stuck on a mountain hiway because of a major truck accident, probably the worst I've ever seen, the truck must have role like 7 times.. it was crushed flat...after we passed that we stopped in the town and headed the rest of the way in the morning.

Then I got set up here in Vancouver, a trip to Ikea and Canadian Tire and many many trips up the stairs, it was all finished

I think it turned out quite nicely if I do say so myself.

So it's pretty nice, trust me, it was pretty gross to begin with. My mom helped me get the place all nice and livible like.

We then went on a trip to downtown on the confusing buses of Vancouver. We went downtown into the trendy downtown core. 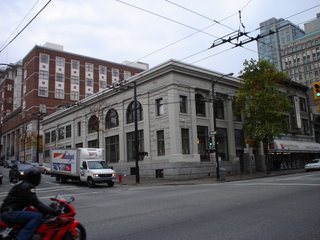 My school which has a trendy coffee bar run by the school just next door and this building is where super trendy filmmaker types and nerdy game designers learn and hang out...... 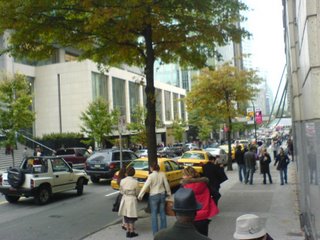 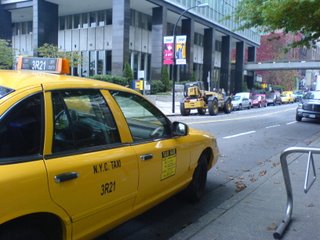 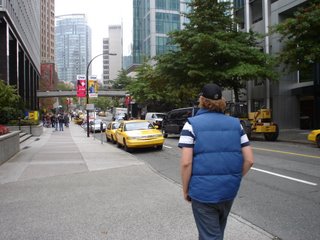 Me in New York... without all the people... (if you haven't figured it out by now, this is the set of Fantastic Four 2 a film I believe Ben Haab is working on)

Okay, then I went to school for the orientation, met a bunch of my classmates, I met an Chinese guy in my film class, his name is Joe, the first guy I met and Nik who is like 28 and a reporter guy.... Kathrin the German girl...... Antony the hyper game designer, Jacky the hyper chinese graphics guy and Dan the super cool dude from Seattle, he only talked to me because he sat beside me for the presentation, after that he took off... oh well, at least I met some people...... I took the bus and understood what the routes were for once. it was a good time. I don't have classes for a week though, so that is kind of suck. So I'm just going to hang I guess.... um.... so........ I have a bunch of pictures I guess, I'm having a good time so far..... just chillin' .... can't wait to start school.

and I noticed something, I think a lot more people smoke here, maybe it's just me but I think thats the case, maybe because there is no winter so they don't have a deterent.... who knows.....

andrew
nice pictures, and nice bachelor pad!!!
you could totally have these trendy dinner parties, with jessica alba and all her friends.
you stud!!

Well I guess that is is time tohang out with some of the coolest ppl who live around you all those guys from CLBI. or maybe not but there is always Martina I heard that she is cool. Say hi to JEssica for me.

Maybe more people smoke there because they haven't been warned of the dangerous side effects of smoking such as lung cancer, gross rotting teeth and diarrhea.

Watch out for those Chinese gangsters my mom always said, they'll get you everytime. Also i asked Jenna to The mess dinner and she said yes. See yah