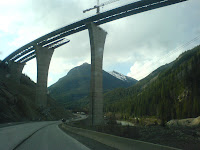 Sweet new bridge deal over Highway 1
I begin today's blog posting with a profuse apology. It has been almost a full month since my last post; far too long. I will not be so lax in the future I assure you. Although, I do believe that my readers will dwindle now the the university crowd is done for the year. Now all those people will be working at jobs and generally be too busy to read this. But it's therapeutic for me, and that's the main thing.

Okay, now with that out of the way, we can move on. So I just had a two week break from school just recently. Technically it was supposed to be one, but when Michael's house burnt down, and I had some documentary stuff to do, I decided to go home early. oh yeah, Mike's house burned down... It was a little scary. He's okay and everything, but the lady that lived downstairs was killed. So we are not sure what's going to happen now. The the main thing is he's safe and still as ornery as ever.

The next week I went back to my old haunt, Saskatoon. Now that was a good time. Coffeeing non stop, seeing the old faces.... watching Hot Fuzz, now that was a good time. Really funny movie.... no one wanted to see it, they were all like "who's ever heard of that movie" and " ah that's going to be lame" and "remember silent hill?" But I finally convinced people to go. And I showed them! it was great! So there!!! Yeah, other then that, we just hung out... played tennis.... pool.... fun times....

Yeah, so then I drove to Viking with Nathan's crap and then drove back to Vancouver on Sunday morning... which was good. There was snow, 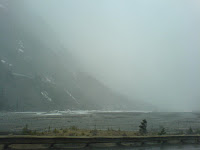 construction and even a van going the wrong way on the Transcanada in Langley. That woke me right up. So yeah, I got here at like 2:30 in the morning. Since I've been back I haven't really had much time to get my life back in order. last night I got home at quarter after ten and tonight It was 11ish. Now bear in mind that that's not all school, some is H&R Block and tonight I spent a couple of hours at Chris's place watching the hockey game. Canucks got to pick up the pace...

That's the play by play of life.

So much for whatnot; back to throwing stones..
Posted by Andrew Sorenson at 1:28 AM

so you took people who didnt want to see hot fuzz, but you didnt take me and i wanted to go!? no fair!! i dont know if i can ever forgive you...

ps. no stone throwing, regardless of housing situation. unless, you are TRAPPED in a glass house with a stone...

Andrew we didn't coffee non stop! we beered at maguires non stop. You're giving us in saskatchewan a bad impression.

Heather said...
This comment has been removed by the author.
5:39 PM

Heather said...
This comment has been removed by the author.
5:39 PM

Somehow I managed to publish my comment three times - hence the "this comment has been deleted by the author" I guess I just thot it was that good.

Oh yes, it was a very good comment. Maybe the best ever? who can know for sure? And true I did somehow neglect to post that. Heaven forbid people think we went for coffee more than beer...

I wanted to go to Hot Fuzz.

And for that, I thank you Alex.