Well, it's been a little while. I guess thats what schooling will do. But honestly, does it have to take up all my time? Jeesh. 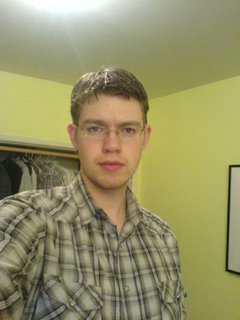 So, I finally decided what to do with my hair.... I got it cut short again, as shown by the picture. I was just getting a little annoying being so long. I may go somewhat long sometime again, but short is good again. Doesn't look half bad if I do say so myself.

Another new addition to my life is Ipod..... ohhhhh ahhhhh! How can I afford that being a film student (one of the poorest of all students) you ask? well, I found it.... yeah thats right. A guy dropped it in the intersection, hoped on a bus and took off. I tried to catch him, and waited to see if he came back, but he did not. And it would have been crushed in traffic had I not picked it up.......So now I guess I have a new Ipod. 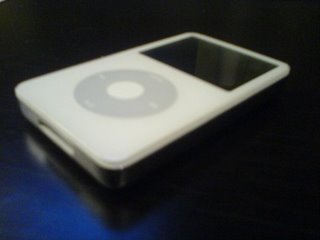 So I guesss this blog is just about how awesome I am.... I mean, I look super cool now, and I found an Ipod.... things are coming up Andrew!

but I gotta crash, on account of having to do school stuff all day tomorrow

Peace Out
Posted by Andrew Sorenson at 11:33 PM

do you have 2 of the same shirt? because the one you are wearing in that picture looks an aweful lot like the one hanging in the closet behind you....suspicious...oh yeah. nice hair.

Ah, the luck of the film student at its best. Clint's gone hunting this weekend,
hope he isn't hunting with Dick Cheney. Also i got paid for basically playing
X-box for a few hours. We are still waiting for a seat sale for tickets by the way.

Andy what to say we all miss you. But i guess that is okay since you have be come so super awsome.


PS Did you ever get in contact with Martina????

I forgot to say i Voted for long hair but short looks really good.

I was just wondering... does your conscience ever bother you when you listen to the iPod? Or do you have flashbacks or nightmares of the man's face?

It haunts my every waking moment...

If I would have found the ipod I would have sold it and used the money to help starving children in Africa. But that's just me.

Dont listen to Nicola,
yesterday I witnessed a horrific scene that involved starving orphans, an ice cream truck and Nicola running mad. She pushed the children into the snowbank and bought the ice cream's truck entire contents then ate all the ice cream in front of the children

You saw that Tabby? I had no idea. I can see how that would have looked bad so I will explain what actually happened. I recognized the ice cream truck driver from a story I read in the newspaper. He was wanted in seven states on several accounts of child abuse. I knew the orphans were in danger so I quickly pushed them out of harm's way and secretly called the police on my cellular phone. I then proceeded to buy all of his ice cream so as to stall him until the police arrived. He was taken into custody and thanks to me, will never harm another child again.

The orphans are doing fine and I visit them at the orphanage almost everyday.