Okay, don't be alarmed..... but I think it's snowing. Yeah, I know it's not supposed to snow in Vancouver, I'm just tellin' you it's snowing. Don't shoot the messenger! I mean, I was dumbfounded, I guess me and the other 2 million plus who live here... we've had like 10cm of snow here in Vancouver alone. Some places have had up to 50cm! honest to goodness! It was one thing to have like a torrential dowpour of rain that rendered our water undrinkable by sliding tonnes of dirt into the resivior, I mean, thats life..... but now it's a huge snow storm!!! I mean Come' ON!!! I went walking today and when a vehicle would pass by it would slosh a bunch of snow everywhere. I was like being attacked by slushies all day!........okay......... I guess that whole begining came off a little pejorative... now let me juxtapose that with the catharsis of a more positive point of view. The snow reminds me of my praries! which can't be a bad thing. And it just screams Christmas, which also, can't be a bad thing...... and now the news is on.... and they are talking about like 50 car crashes and whatnot.... the weather here is trying to kill us... I'm not even joking.....help... okay, I am joking (for those of you who have no clue what sarcasm is....or is it irony? or both...?) 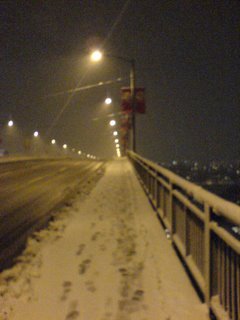 It was funny, I went to a Macs store to buy some bus tickets.... seems normal and boring right? Wrong! you should know better than that, I always tell awesome storys.... shame on you.... okay, there i was at the counter, buying my bus tickets and this girl walks in and slips on her way to the drinks, probably some health drink crap... and she condisendingly tells the cashier "You should really have a sign saying it's slipery here, I almost fell and hurt myself! You know there are some really crazy people who would sue over this!" (note the condesencion!!!)! and then she moved the slippery sign to the back corner where she slipped from where it was in the front of the store.... warning people that the floor was slippery..... I tell you... She was even wearing rubber boots- the most slippery footwear (I mean it was snow, not rain sheesh).... and the floor itself was not slippery, it was the snow on footwear and the linolium floors.... so....it was her own fault.... I thought it was funny anyhow. stupid store not having signs everywhere!!!!!! 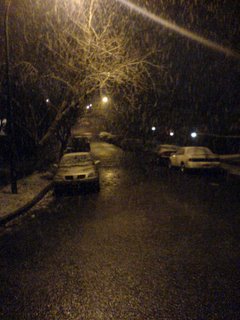 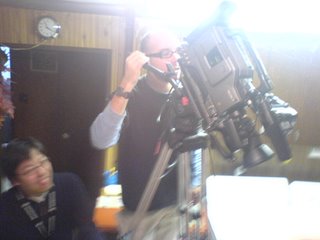 Heres me and my documentary crew being all cool and whatnot.... we work in a sexy business..... or so I've been told. Oh, and introductions..... The one on the left, that's Casey Li, our documentary director, and thats Arjay Joley our cinematographer... and in the second picture, thats me on sound, it looks cooler when I have the pole and mixer going.... really.... I'm an expert!!!! 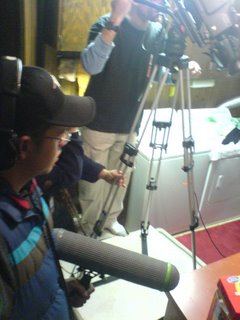 Posted by Andrew Sorenson at 9:57 PM

Wow, snow in Vancouver. That's crazy. But also funny because here in Toronto we're getting lots of rain and insanely warm temperatures for this time of year. Yesterday it was like, 15 degrees. What the hell.

i have about 5 million things to say to this blog. firstly, i think we should all blame global warming for this snow. secondly, yay i know what juxtapose AND catharsis mean! third, she was probably wearing rubber boots because she is from vancouver and therefore has no reason to own winter footwear, and fourth (i guess i really only had 4 things to say) who took the picture of you....?

If I would have been there when that lady fell I would have helped her up and made sure she was okay. Then I would have cleaned up all the snow in the store so that no one else would get hurt. But that's just me.

Snow hey, dont think i know what that is????

I would just like to inform all that it is now back to a resonable +5 here, and I am happy.

i would like to inform you that you should be quiet! and also that i'm mildly disappointed in you for knowing the words to fifty cent songs.

You look kinda slack jawwed in this picture.