Thank you for Smoking

No, I am not becoming a pro smoking lobbiest. Today we had a guest lecture from Jason Reitmen, the director of, you guessed it, Thank You for Smoking.... well, you better have guessed it. A movie staring Aaron Eckhart, William H. Macy, Robert Duvall, Sam Elliot, J.K Simmons, David Koechner, Maria Bello, Rob Lowe, Adam Brody, Katie Holmes. It also grossed over 24.8 million, on only a 6.5 million dollar budget. He is in town working on his new movie Juno
staring
..... Wow, you can do some pretty cool stuff with this new blogger....

The talk was pretty awesome, neigh insipiring...... It was cool because Thank you for Smoking was his first major movie.. All of his stuff before then was shorts that he showed around the festival circut. Jason Reitmen is the son of director Ivan Reitmen.. whom you may know from such great movies as Thats just some of them... Apparently he made quite a few movies..... but yeah, so hearing the talk was pretty cool......... I'm just going to say it was completly awesome.

So I have decided that I will speak at film schools when I am a famous director.... basically so I can be as cool as him.... probably cooler....

In other film school news....

I had a meeting with the writing instructor and he approved my treatment to go one the the first draft stage of development.... so I am going to be starting to write my first script soon... exciting.... There was a bit of confusion and he had some concerns... but that was just because I didn't write it out quite clearly enough... my bad.... but in the end he liked my idea.. which is cool... I didn't really think he would, since he has a little different taste. He said that my story structure was solid, and my character had good motivation backed up by compelling supporting characters... and now that I cleared up the misconception, it also has a good climax, well better than he thought it was. Basically his only comments were to add more highs and lows in the second act, to make it more intense for the viewer, to make them care more... and I totally agree.. so I'll do it....

So it was a very film based day today, which is totally awesome... And to make it even better it was an completely beautiful day... I mean it was so nice today... Sunny and +13.... I walked to English Bay and watched the ships... took a ferry ride to granville island and walked through the warket... and then walked home... It was so nice... look at me.. I'm gushing... thats how nice it was... 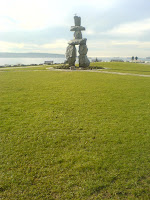 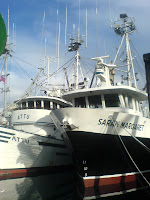 Something else that was exciting... I worked for H&R Block this last weekend. How random is that? The dad of a friend of mine works there and he got us a job setting up cubicles for the H&R Block locations in department stores... I set up 3 different locations... It was a lot of lifting.... and as a film maker... I don't have much muscles.... I guess it will help, but my arms sure hurt afterwards.... oh so much lifting..... 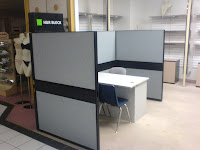 The locations were also set up in the womens unmentionable section most of the time... which was a little awkward... I guess they don't really want guys doing their taxes... or maybe they want them to do the taxes while the wives shop?... I don't know..... and this is only one wall of the setup... It really was bigger..... 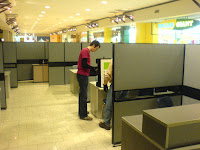 There, that's more about the size of the offices that we built... and that is my friend Chris working on a sign.... good times... 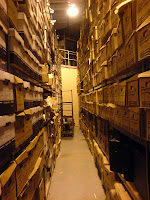 The sweet "office" like wearhouse of H&R Bock. where we loaded the truck, oh so many times... 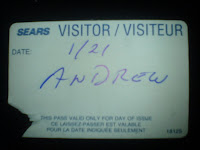 I just thought this was cool... I got a sticker saying I was a visitor at Sears.... I wish every store gave you a sticker for visiting.....
Okay, thats enough random crap for today, since it is now like the longest post ever.... but I had some cool stuff going down that I thought you all would appreciate.... so rock on...

Remember, The important is to not be intimidated by all the stuff I know,
Andrew
Posted by Andrew Sorenson at 9:30 PM

Knowledge is power, hide it well.

Ok, just back that train up, So his dad worked on Ghostbusters, the best movie ever! Kickass!

today on tv they talked about ghostbusters. it came out in 1984. true story.

Wasn't his Dad also one of the actors on Ghostbusters? I'm pretty sure he was the tall guy with the glasses... can't think of his name now.

Nicola, Nicola, Nicola.... You are very much mistaken... That would be of course, Harold Ramis... who was a co-writer of the movie... not the director. The other writer being Dan Aykroyd.

swiffer gives cleaning a whole new meaning.....just think about that...

um... what about swiffer?