It was a cold rainy day here in Vancouver, but that didn't affect the football. At 1:00 today the B.C Lions and the Saskatchewan Roughriders played to a croud of over 50 000. The Riders got off to a bad start and by the half they were down 32 to 4. I thought I would have been happy watching the riders lose... but I ended up cheering for them as they were the underdogs. But they also deserved to lose because they beat my Stamps. So there. The game ended at 45 to 18. 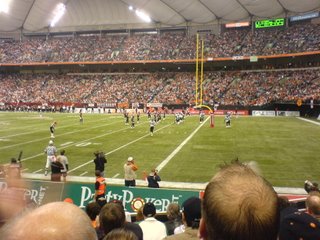 This was the first of four arrests of people who ran out onto the field. 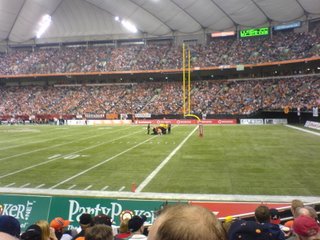 Some weird B.C Lions gopher exterminators just killed Gainer the Gopher! They did it!!!! they tried with TNT first, but Gainer was to smart to fall for that.... but the poison got him.... poor poor Gainer........ but then he woke up? I guess he's one tough gopher. 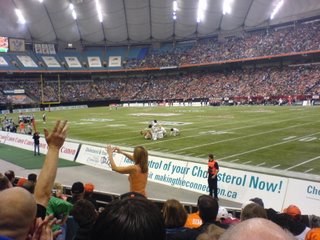 The trophy ceremony for the western confrence champs the Lions 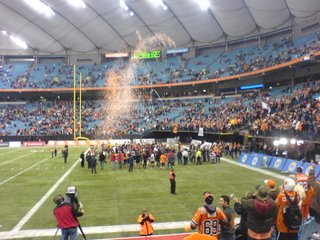 The mighty throng of fans leaving BC Place down Robson Street. They blocked off traffic for many blocks... I wonder why they didn't just use the sidewalk like in Edmonton? And the Cops at the library. 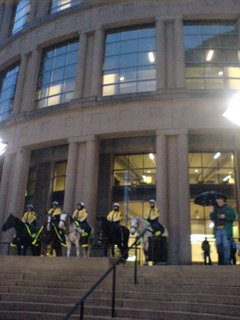 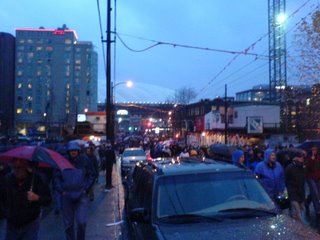 Posted by Andrew Sorenson at 5:25 PM

That game was very painful to watch, Clint had to work so he got out of watching it.

got out? you make it sound like it is a legal requirement to watch football.

it's a right and responsibility to watch a football game.

it cant be a right AND a responsability. what did they teach you in homeschool?

what are you talking about? of course it can, it's like voting! which is a right and responibility.

voting is not the same as football.

yeah, it's not near as fun